Our words have the power to teach, inspire, motivate, and uplift people. 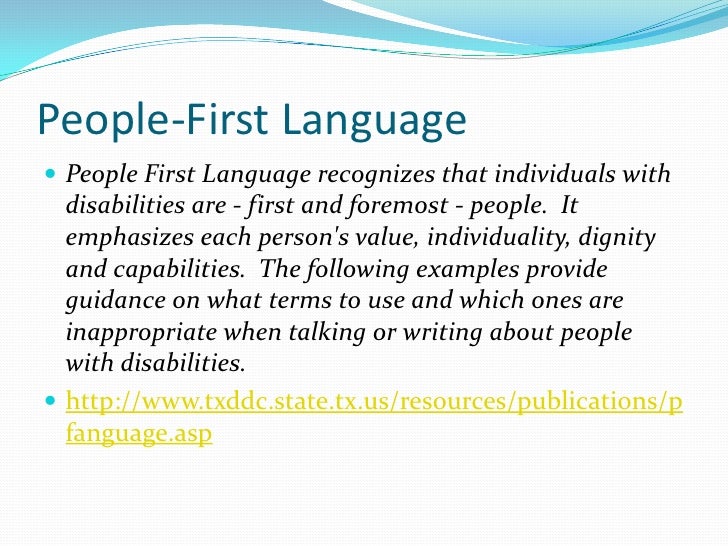 An Oppositional Viewpoint Date: This is a thought that has been on my mind for awhile in regards to people first language and what it does to this industry. Blogs - Writings - Stories Main Document I've been working with people with People first language for over two years now.

This People first language not my background, this is not what I went to school for. In fact, I really hadn't had too much experience with persons with disabilities until I started working for my current company.

And contrary to how people often treat that, I'm not sure it's a bad thing. Coming into an industry where most people have spent years of their lives, an industry that has created its own sub-culture, has given me some strengths: By seeing things as an outsider and glimpsing a foreign world has given me the eyes of a recent immigrant in a distant culture: I tend to notice things, good and bad, that others probably have never thought of.

And with any foreign culture, there will inherently be certain aspects that an outsider can only shake their head at, smirking at the thought of how this came to be and wondering why everyone else seems to be so obedient and accepting of this strange custom.

And as such, this idea should be abdicated and resources moved to support different ideas that are better suited to bring about change. I can only imagine your disdain and shock at my words right now. After all, people first language is a hallmark of this industry, a great source of pride for those who have spent years fighting for this idea.

And while I can appreciate and respect those who have tried to do so, this idea represents to me the two problems I have mentioned. So let's look at those.

Well, it's a type of linguistic prescription in English, aiming to avoid perceived and subconscious dehumanization when discussing people with disabilities, as such forming an aspect of disability etiquette. The term people-first language first appears in as recommended by advocacy groups in the United States.

The basic idea is to impose a sentence structure that names the person first and the condition second, for example "people with disabilities" rather than "disabled people" or "disabled", in order to emphasize that "they are people first".

Because English syntax normally places adjectives before nouns, it becomes necessary to insert relative clauses, replacing, e. The speaker is thus expected to internalize the idea of a disability as a secondary attribute, not a characteristic of a person's identity.

Critics of this rationale point out that separating the "person" from the "trait" implies that the trait is inherently bad or "less than", and thus dehumanizes people with disabilities.

Critics have objected that people-first language is awkward, repetitive and makes for tiresome writing and reading. Edwin Vaughan, a sociologist and longtime activist for the blind, argues that since "in common usage positive pronouns usually precede nouns", "the awkwardness of the preferred language focuses on the disability in a new and potentially negative way".

Thus, according to Vaughan, it only serves to "focus on disability in an ungainly new way" and "calls attention to a person as having some type of 'marred identity'" in terms of Erving Goffman's theory of identity. The National Federation of the Blind adopted a resolution in condemning politically correct language.

The resolution dismissed the notion that "the word 'person' must invariably precede the word 'blind' to emphasize the fact that a blind person is first and foremost a person" as "totally unacceptable and pernicious" and resulting in the exact opposite of its purported aim, since "it is overly defensive, implies shame instead of true equality, and portrays the blind as touchy and belligerent".

Keep in mind that the disability rights movement and its thinking is almost unknown outside the movement itself! It's a Waste of Time People first language inherently cannot accomplish what it is trying to accomplish.

It's not that people first language could be better and more effective if marketed differently, or took a different approach, or some other such change. The problem is it just can't do what it's trying to do. People first language is, at its core, based on a distinctively odd, Orwellian philosophy which does not reflect reality: We, as people, often want to believe this but language doesn't work like that: Changing language may help to soften a blow ever so slightly as in saying some "passed away" rather than "dead" or make subtle changes of that nature, but it doesn't actually change how a person feels about something overall.

Language doesn't work like that. And even when we do manage to make substantive changes to the denotation of a word, we simply cannot change the connotation.Use the worksheet and quiz to check your understanding of people-first language. The meaning of this term and how to use this type of language are topics covered on the quiz.

Quiz & Worksheet Goals. Politically Correct vs. People First Language. Posted on July 3, by Elisabeth. I cannot stand politically correct (PC) language. But I am all for People First (PF) language. There is a huge difference there but sometimes people are not aware of what the difference is. People-First Language is about making respectful word choices and remembering to always put the person before his or her disability. No one wants to be identified by only one characteristic.

Action for Access - Changing Perceptions of Disability in American Life

Therefore, use language that indicates that a disability is a part of the person's life, but does not define the person. More than a fad or political correctness, People First Language is an objective way of acknowledging, communicating and reporting on disabilities. It eliminates generalizations, assumptions and stereotypes by focusing on the person rather than the disability.

People First Language This information can be a helpful resource for media, writers, and for general use The words we use have the power to help or hurt.